An unprecedented 938 students from 123 schools lit up the pool at the Sydney Catholic Schools Swimming Championships at Sydney Olympic Park Aquatic Centre in Homebush on Tuesday 15 March 2022.

In what was a Sydney Catholic Schools (SCS) first, students from both primary and secondary schools competed on the same day.

The Championships also featured an unprecedented level of multi-class athletes, with 18 students swimming in both primary and secondary events.

The day was a chance for some of the best young swimmers in Sydney to show their potential and they certainly didn’t disappoint with a number of SCS records tumbling. Brother-sister duo Ella and Max from St Therese Catholic Primary School Mascot dominated in the primary session, with the pair breaking two records each on their way to both being crowned Age Champions.

Please note: all podium photos will be distributed by schools.

It’s a quick turnaround for qualifying swimmers who will now move on to compete at the Catholic Schools NSW Championships on Tuesday 22 March 2022.

Following that, the top swimmers will compete to be crowned the best in the country at the School Sport Australia Swimming Championships later this year. 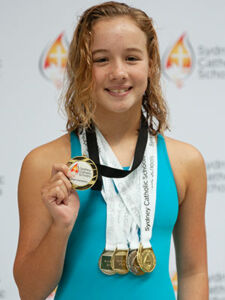 Swimming is one of 16 representative pathway sports offered to primary school students at SCS.

“Sydney Catholic Schools is proud to provide our students with the opportunity to develop fundamental skills in a variety of sports and also the chance to trial and represent at a state and national level,” SCS’ Executive Director, Tony Farley, said.

“At Sydney Catholic Schools, we believe sport is for everybody, from non competitive participation through to our elite athletes.

“Sport also teaches students valuable life lessons in working with others and how to be gracious in victory and in defeat,” added Mr Farley.