‘An exciting year for the arts’

Sydney Catholic Schools’ creative and performance artists have been enjoying phenomenal success in the wake of COVID-19, and the opportunities for students with an artistic flair to flourish are only increasing.

Singer-guitarist Chrystal Ruz from SCS’ ViVA Music 1 class of 2020 was recognised on the Encore Honour Roll for exemplary performance in the Viva Voce (Musicology) component of her HSC Examination. 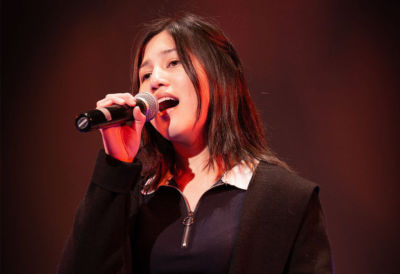 And 12 SCS students were chosen from 9,000 entries to have their works displayed in the annual ArtExpress HSC showcase exhibitions.

“Not only are we celebrating outstanding HSC results, we are offering so many new opportunities for students to perform and create,” said Eva Spata, SCS’ Specialist: Creative and Performing Arts.

Excitingly, SCS has already this year launched a comprehensive music education program titled Amadeus in 14 of its schools, providing students with orchestral instruments, as well as classroom and ensemble music lessons led by specialist teachers.

Plus, Southern Cross Catholic College Burwood is for the first time offering full-time courses for students in Years 9 to 12 seeking a specialised education in the performing arts.

The college’s 2021 program includes the NESA board developed Music, Dance and Drama courses (all levels), as well as a Certificate III in Community Dance, Theatre and Events.

“The Certificate course is aimed at triple threat performers, who can sing, dance and act,” Ms Spata said.

The year that was

“The year 2020 has seen the most HSC bodies of work included in ArtExpress for the (Sydney) Archdiocese,” Ms Spata said.

She said the number of Archdiocesan inclusions had more than doubled compared to the previous year.

Bethany College Hurstville graduate Chrystal studied Music as part of the part-time ViVA program at Southern Cross Catholic College Burwood, under Vita Greene. For her 2020 HSC she performed one song, submitted one composition, and did two Viva Voces.

“Viva Voce (Musicology) students are required to research a topic of interest and aurally analyse pieces of music according to the concepts of Music,” Ms Spata said.

“On the day of the practical exams, the examiners lead a 10-minute discussion with the student and ask questions related to the chosen topic – Chrystal’s Viva Voces were deemed exemplary and were nominated and selected for inclusion in the honour roll for Encore.”

Chrystal went on to be awarded the National Excellence Scholarship to study the Bachelor of Music, majoring in Composition and Music Production, at the Australian Institute of Music.

“I am extremely proud of all the hard work of the 2020 Year 12 students, along with the support of their teachers in such a difficult and unusual year” –  Eva Spata

“As with the rest of the state, students had a period of time in (COVID-19) lockdown where many did not have access to all the art materials they normally would at their schools within their homes,” Ms Spata said. 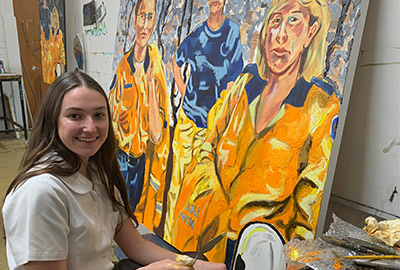 “Whilst teachers were mentoring over zoom, there were still challenges, as nothing compares to personalised teaching and learning in the classroom.”

Their hard work paid off, with the number of Band 6 results alone speaking volumes.

Sydney Catholic Schools’ Year 5 and 6 students also swept the pool in the 2020 Christmas Story Art Exhibition and Competition, held in conjunction with the Dioceses of Wollongong and Bathurst.

Why are the arts so important in schools?

“Besides the intrinsic benefits – such as students finding a voice to express themselves, having empathy, exploring their imagination and creativity – there are instrumental benefits.

“They include cognitive development, ‘learning how to learn’, and improved academic performance.

“There are also attitudinal and behavioural benefits, such as self-efficacy and self-discipline, along with improved attendance at school.”