Previous
Next
Students shine at ArtExpress

Nine students from Sydney Catholic Schools (SCS) have been chosen from 9,000 entries to have their works displayed in the annual ArtExpress HSC showcase exhibitions.

“This year has seen the most HSC bodies of work included in ArtExpress for the (Sydney) Archdiocese,” said Eva Spata, SCS’ Specialist: Creative and Performing Arts.

She said the number of Archdiocesan inclusions had more than doubled compared to the previous year.

“I am extremely proud of all the hard work of the 2020 Year 12 students, along with the support of their teachers in such a difficult and unusual (COVID-19) year” – Eva Spata said.

Out of 9,000 entries, only 50 outstanding bodies of work were selected by NESA for this year’s exhibitions.

Among the works featured in this year’s exhibition is a film, titled  Intrusion, by Marist College North Shore alumnus Maxwell Partridge. 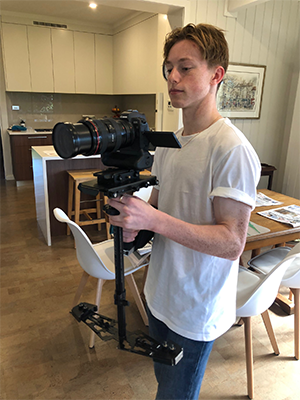 “I wanted to make a film that demonstrated that emotions, feelings and mental states can be shown through dramatic techniques, such as form and structure, rather than telling the audience,” Maxwell said.

Settling on a body of work was not as easy as it first seemed, however.

“It took a while to pick a concept that I was set on, but from there I worked on the project for about six to seven months with a few re-shoots which are important to the whole process,” Maxwell said.

American TV show Mr Robot was among the influencing factors in his project.

“Inspiration definitely came from the show Mr Robot, as well as looking at different music videos and how they tell a story with visuals; letting the music carry it through,” Maxwell said.

Maxwell now has his sights set on a career in the film industry.

“I’m doing a media and communications course (at Macquarie University) to study film practice as well as interactive design, both practical film and video effects editing,” he said.

HSC 2020: Sydney Catholic College with the most All-round Achievers