In what was his Paralympics debut, the 16-year-old recorded a personal best time of 4:13:54 to finish on the podium.

Tuckfield, one of Australia’s youngest athletes at the Games, edged out countryman Brenden Hall for the bronze while fellow Aussie and Tuckfield’s training partner, Martin William, claimed the gold medal.

The performance caps off a meteoric rise for the former St Joseph’s Catholic Primary School Como student, who only began swimming at the age of 10.

Eyes on the prize

In the heats, the Year 11 student announced himself as a genuine medal chance when he swam the fastest qualifying time of 4:14:26, beating his previous personal best by 1.8 seconds.

In a competitive final that saw the Paralympic record fall, Tuckfield swam faster again to win bronze behind William and silver medallist Ugo Didier from France.

IT'S GOLD AND BRONZE FOR AUSTRALIA 😱

Tuckfield, who has cerebral palsy, also competed in the Men’s 50m Freestyle S9, finishing 7th in his heat.

The Sutherland Shire local said the Tokyo experience is one that he’ll never forget.

“I’d been training these past weeks the best I ever have been so I knew I could post something very good.”

“But still… I touch the wall, I turn around and I look at the board and I’m just shocked” – Alex Tuckfield 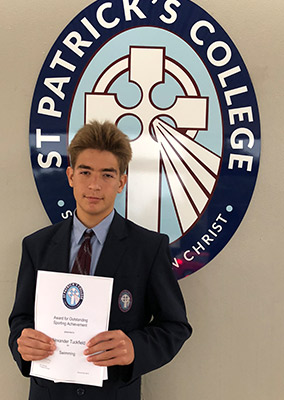 Tuckfield says one of the most special things about his time in Japan was the camaraderie among the Australian team.

“I’ve got a really sore throat from all the cheering I’ve been doing lately!” Tuckfield said.

“We’re all very team-driven – we’re staying in a tight space because of COVID and I think that’s brought us together a bit more.”

“I am planning to go to Paris… I cannot wait to see what a fully-fledged Games without COVID would be like.”

Alex’s mother, Agnes Tuckfield, said the family were all incredibly proud of what their swimming superstar was able to achieve.

“We had a Zoom meeting set up with all our friends on one screen and Alex racing on the other screen,” Mrs Tuckfield said.

“We always hoped for a medal but we were just hoping he’d get to the final! 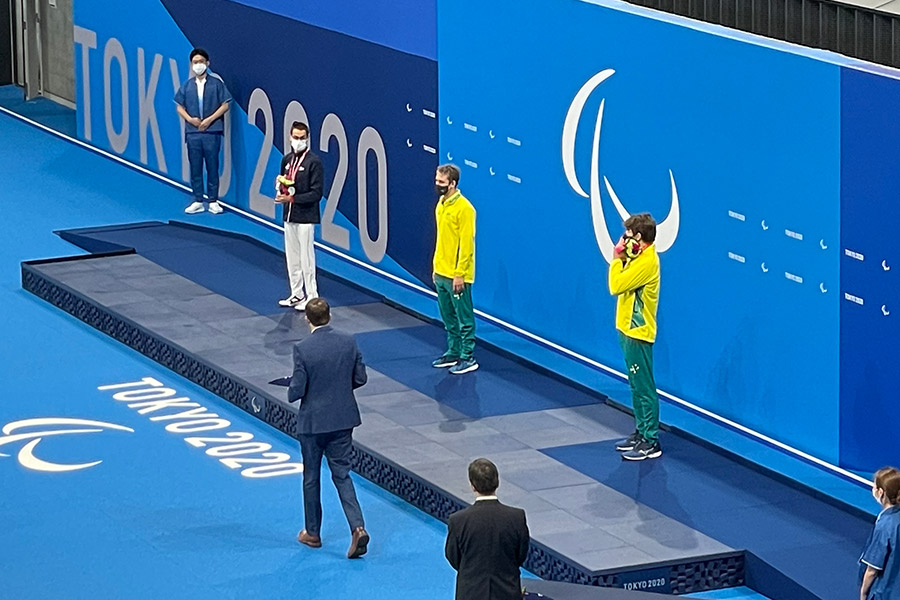 Tuckfield stands on the podium in Tokyo

“To be selected to represent Australia, to break his PB in his heat and then to go on to win a bronze medal is an amazing achievement,” said Ms Kenney.

“We are so excited for him as he has worked so hard for this and we could not be prouder.”