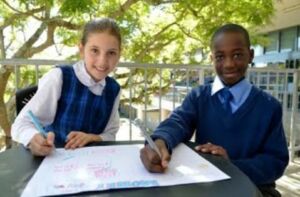 North Sydney parish was established in 1856 and came under the care of the Jesuit Fathers from 1880. Early Catholic schools in the area were in the care of lay teachers, but with the withdrawal of government funds in the 1880’s Religious Orders were called on to run schools. The Marist Brothers established a boys school beside St Mary’s Church in Ridge Street in 1888. When they moved to Manresa Hall in Carlow Street in 1916, the Sisters of St Joseph moved into the small two-roomed building in Ridge Street and there began the present St Mary’s School in the same year. This school became the Demonstration School for the Josephite Training College. With Sr Mary Donatus Egan as first principal, the early Sisters travelled each day from their headquarters in Mount Street. The school has now combined with Marist North Shore to create a Kindergarten to 12 school.