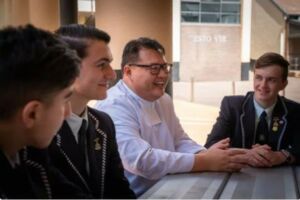 With a Catholic high school for girls close by and established in the growing suburb of Ashfield since 1881, a Catholic boys’ school had long been desired. The Vincentian Fathers had charge of the parish, and by 1916, the new parish priest, Fr Paul Cullen, had persuaded the De La Salle Brothers to open a boys school, providing them with a building with three classrooms. The foundation stone was laid in 1917, and with World War I grinding on, De La Salle Brothers’ School Ashfield was opened to 60 primary pupils (Third Class to Sixth Class) and three Brothers. Br Benignus Patrick was the first principal. Now, the school is a Year 7–12 campus.