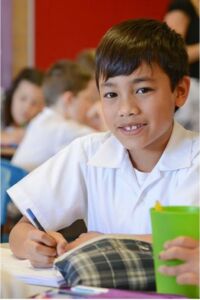 St Gabriel’s School and Church was blessed and opened on 29 January 1939. The school consisted of three large classrooms with folding doors that were opened on Sunday or when Mass was celebrated. This meant that each Friday, classroom doors were opened and classrooms were transformed into a church. This continued until 1940 when St Gabriel’s Parish Church was opened. St Gabriel’s School was first staffed by the Sisters of Charity from the Hurstville Convent. It was a small co-educational primary school, with about 100 pupils in its first few years. After Third Class, the boys left to attend nearby schools. Today, the school is a Kindergarten to Year 6 school for boys and girls.