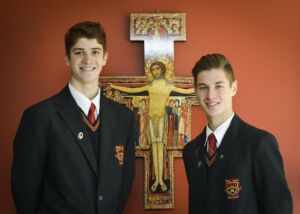 The parish priest of Eastwood, Fr J M Cusack, approached the Marist Brothers about establishing a boys school. When they agreed in 1936, the parish bought land in Hillview Road, Eastwood. A local chemist, Mr Elliott, financed the building of the first block of four classrooms, at a cost of $10,000. On opening day in 1937 there were 107 primary boys, beginning with Third Class. The first teachers were Brs Leopold Smith (Principal), Evan McDonough, Kenneth Harris and Loyola Sullivan. The present name, Marist College Eastwood, adopted in 1993, recognises this change as well as the intention to maintain the Marist ethos. Today Marist College Eastwood is a systemic school for boys from Years 7 to 12. The college emphasises its strong tradition of academic excellence in a climate of respect and care.