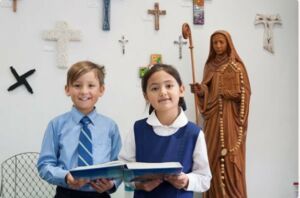 Opened on 13 May 1923, St Brigid’s Catholic Primary School Coogee was administered by the Brigidine Sisters from Randwick with Sr Paul King as principal. At first, it was a primary school for girls up to Sixth Class and for boys to Second Class, with older boys attending Marist Brothers’ at Randwick or later De La Salle School Coogee. Today the school remains a Kindergarten to Year 6 school for boys and girls.