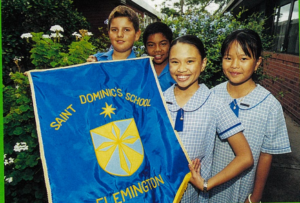 In the 1920’s, Flemington was part of a developing area of Sydney. The priest at Strathfield decided to build a church hall in Flemington. He arranged for a school to be run there by the Sisters of St Joseph. The school was then opened in 1923 by the Sisters of St Joseph. By the 1930’s there were 130 children, girls from Kindergarten to Year 6 and boys from Kindergarten to Year 4. Since 2002, there was a significant decrease in enrolment numbers. With predictions of declining numbers it was decided to close the school in 2006.