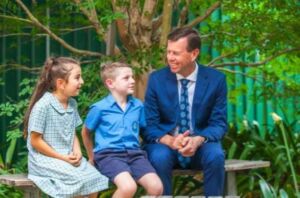 St Michael’s Catholic Primary School Meadowbank opened in 1922 under the leadership of two Sisters of Mercy (Parramatta Congregation) and the parish priest, Fr Gell. In the early days classes were held in the church, which was built the year before, requiring classrooms to be packed up on the Friday ready for Sunday Mass. Over the next 100 years, various building projects funded by the parish and government were undertaken. In 1995, the Sisters of Mercy announced that they were withdrawing from the leadership of St Michael’s and from 1996 onwards, the school has been led by lay principals.