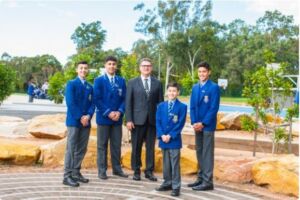 Fairfield parish was established in 1946 as there was a need for a Catholic boys’ school. Mrs Dreis agreed to sell her ten-hectare property to the Archdiocese on very generous terms, and in 1952, the Patrician Brothers’ Council agreed to a request from Cardinal Gilroy to establish on it a senior primary and secondary school for boys. On 31 August 1952, His Eminence, Cardinal Gilroy, assisted by the first parish priest of Fairfield, Fr Cunningham, blessed the foundation stone for the first block of classrooms. Patrician Brothers’ College began on 27 January 1953 with an enrolment of 170 boys. In 1961, the school was extended to the Leaving Certificate, so that it became a full secondary school. Today the school still runs as a Year 7–12 school.