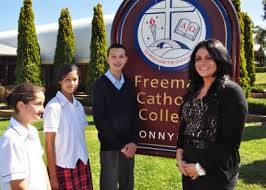 In 1983, the Archdiocese purchased seven hectares in Bonnyrigg Heights, which would become a site for a parish church and for a regional secondary school to serve the parishes of Mt Pritchard, Horsley Park, Bonnyrigg and Bossley Park. It was Fr John Langtry who suggested to Cardinal Freeman that the new college be named in his honour. Cardinal Freeman agreed and he officially opened Stage 1 of the school on 30 June 1985. The new school began in six demountable classrooms with 105 students and 9 teachers. Today, the school is a well-resourced college with modern facilities catering for the needs of 1300 students and a teaching and support staff of 114.