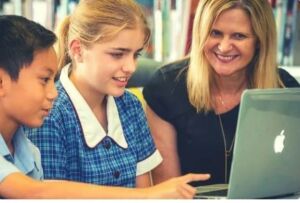 St Patrick’s College Sutherland is a Catholic co-educational secondary school, operated by Sydney Catholic Schools. The Sisters of Mercy opened a school called St Patrick’s School in 1924 which would be renamed to Mary Immaculate College. The Presentation Sisters replaced the Mercy Sisters in 1950 and in 1953 the school expanded with a secondary department for girls. The Christian Brothers also founded St Patrick’s Christian Brothers’ College, in 1956 which was a school for boys in Years 7 to 12.

The year 1985 saw the first step towards the amalgamation of the two colleges, under the name of St Patrick’s College, which was one of the first to be attempted in the Archdiocese of Sydney, and was a long, challenging process which took until 1992 to complete. Mrs Dianne Kennedy was appointed the first lay principal in 1994 and today the college educates their students by promoting the quality of learning, fidelity to the Gospel, academic excellence and an orientation to the service of young people and their families.