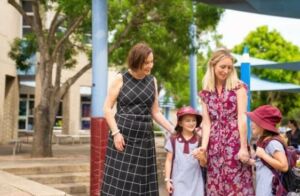 The parish priest of Sutherland, Fr Lawrence Cruikshank, and the CEO, Sydney had taken steps to establish a Catholic primary school at Menai. Holy Family Catholic School opened in January 1986 with 55 children and 3 teachers, Sr Judith Baz being the founding principal. The school was extended until it had co-educational classes from Kindergarten to Year 6. The new buildings were blessed by Cardinal Edward Clancy and opened by Mr Robert Tickner MP on 5 March 1995. Holy Family is a Catholic systemic primary school within the Archdiocese of Sydney. It is now a 4 stream school and the motto of, ‘Wisdom through Faith and Unity’, forms the basis of Holy Family’s vision and mission statements.