There were plenty of surprises during filming of a Mother’s Day TV special at St Francis de Sales Catholic Primary School Woolooware this week.

Students and a beloved teacher took centre stage during filming of a Mother’s Day segment for national Channel 9 TV show, TODAY, on Tuesday.

Weather presenter Tim Davies – himself a St Francis de Sales alumnus – asked students questions about their mums. But what the kids didn’t know was that their emotional mums would later watch what the unabashed students responded with.

And what Mr Davies couldn’t know is that he’d also be reunited with his former Kindy teacher during filming.

Asked what she thought of Mum, Year 4 pupil Darcey Dolden, commented: “She looks after me a lot and she does funny dance moves.” 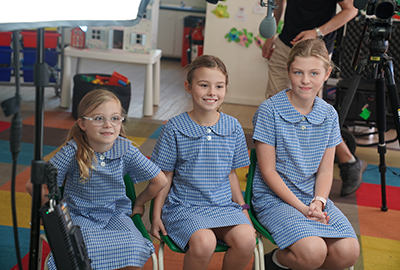 There was also some light-hearted banter between Darcey and her two siblings, Emilie and Grace, about who was Mum’s favourite child.

“Deep down I think Mum likes us all the same, cause we all have different personalities and we’re all good,” Darcey said laughing.

Coming back to his old primary school brought back nostalgic memories for presenter Tim Davies.

“Everything seems so much smaller than what I remember,” Mr Davies said.

“My old kindergarten room, that’s now a hall. Everything’s changed, it’s a whole lot more colourful than what I remember.

“I had obviously a very happy experience here at school, but to see it now so bright and colourful and posters on the walls and stickers everywhere and just smiles, everywhere … it looks like nothing’s really changed in terms of the wonderful learning experience the kids can have.”

“To come back now and see how different it is, yeah it’s really special. I love it” – TODAY presenter Tim Davies

To cap off the homecoming, Mr Davies was reunited with his Kindy teacher, Bernadette Hardwick, who still teaches at the school.

“That must be 30-something years that she’s been teaching,” Mr Davies calculated out loud.

“What a teacher, what a vocation!

“It’s amazing to think that she’s looking after so many generations of kids coming through. She was my Kindergarten teacher and to run into her today was just such a thrill.

“Great to be back, but I think that’s the highlight.”