Sport, however, was the real winner with all 200 competitors demonstrating excellent sportsmanship and determination over the course of a dull rainy day.

“It was inspiring seeing the enthusiasm and camaraderie of our young rising stars on display here today [7 April], pushing each other to excel to the best of their ability in adverse weather conditions,” SCS’ Manager Pre to Post Sport, Damien Kerr, remarked yesterday.

“Here’s the magic of teamwork; the players were able to consistently find ways to buoy each others’ spirits and excel despite the weather challenges.”

The path to Olympic glory

A proud moment in history

For the first time in Sydney Catholic Schools’ history every secondary school student was given the opportunity to compete against their peers in an organised conference format that will culminate in a Sydney wide championship final each season.

“We have built this new Catholic sporting competition so that every student, in every one of our schools, has opportunities to compete at a level which challenges them,” Mr Kerr said.

The partnerships allow students who already play water polo to represent their school in the sport, while giving first-timers the opportunity to also join in the aquatic fun.

With opportunities like these, Mr Kerr is quietly optimistic SCS’ weekly inter-school water polo competition will only gain in popularity, especially as we enter the hotter months.

“Seeing the excitement as they jump in and out of the pool and as they are excelling – in some cases in a new sport – is just great,” Mr Kerr said.

Best described as a combination of swimming, handball, football, rugby and wrestling, water polo is a competitive team sport played in water between two teams of seven players each.

The game consists of four quarters in which the two teams attempt to score goals by throwing the ball into the opposing team’s goal. The team with the most goals at the end of the game wins the match.

Participation in water polo has many benefits, from building up bodily strength and stamina to building powerful communication skills as a leader.

Click on the button below for the full Water Polo Championships results.

A round of applause for Emily

Among the standout athletes at the Water Polo Championships was Domremy Catholic College goalkeeper and Year 7 student, Emily Broadbent. 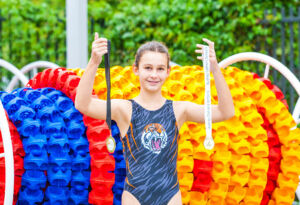 In a blink-and-you-miss-it moment Emily collected a gold medal in the Junior Girls Final and then jumped back in the pool to offer support to Domremy’s Intermediate Girls team in their final.

Emily, who has been playing water polo since she was eight, said defending the goal against older opponents in the Intermediate Girls Final posed some challenges.

“They have stronger shooting,” Emily said.

Asked if the rainy conditions affected her game, Emily said not really, adding “It was warmer in the water, but it’s always better to play in the sun.”

Excitingly, all three events were live streamed, to ensure our viewers won’t miss a thing.

To watch all the live action from the day, use the menu bar in the top right-hand corner of the video player below: