Holy Cross College Ryde student Jaxson Rahme is set to follow a path tread by some of the biggest stars in rugby league after being named in the Australian Schoolboys 2021 Merit team.

The prop forward was rewarded for a stellar year with selection in the 17-man squad, which features some of the best young talent in the country.

It all points to a big future for the 17-year-old, who joins household names like Nathan Clearly and James Tedesco as players who have recently represented the Schoolboys side.

Rahme said being named in the squad was a proud achievement for himself and his family.

“Mum started crying! It was a big moment” – Jaxson Rahme

“It doesn’t matter how good you play, it’s about what the selectors are looking for, so I’m just happy that I’ve been able to fill that role,” Rhame said. 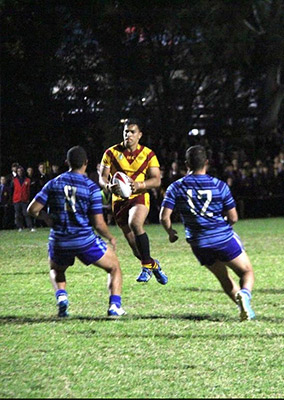 Rahme was named NSW Combined Catholic Colleges’ Under 18s most valuable player in 2021.

Rahme credited the rugby league program at Holy Cross and his teacher and coach, Tim White, for helping him realise his ability.

“It’s helped me grow as a player,” Rhame said.

“They’re (Holy Cross) all about discipline, respect and loyalty.

“Mr White has taught me so much about the role that I need to play.”

Mr White, who was also named coach of the Schoolboys side, said he’s seen Rahme go from strength to strength in his time at Holy Cross.

“Jaxson is a player who sees things a play or two ahead and possesses the skill and size to make it work,” Mr White said.

“If he keeps challenging himself and working towards goals then I hope to see him in the NRL,” Mr White said.

A breeding ground for talent

Rahme is the 19th Holy Cross student to achieve Australian Schoolboys selection for rugby league, a feat Mr White says is testament to the culture of the school.

“That’s the goal of the program – to produce young men to be proud of, not just athletes,” Mr White said.

“We produce leaders and young men that show how good Catholic education is.”