Water riveting day of action in the pool!

That includes the cheeky duck that took a dip in the pool as kids and staff from 16 SCS primary schools arrived at Sutherland Shire Leisure Centre for a day in the sun.

HOW THE DAY UNFOLDED

The action then heated up in the Junior Girls (8-10 years) Freestyle Relay.

It was a battle between Our Lady and St Patrick’s Catholic Primary School Sutherland.

Charli Moses, for St Patrick’s, looked to be in control but Felicity Barnes and Estelle Slater fought back to put Our Lady of Fatima three body lengths in front before the final leg. 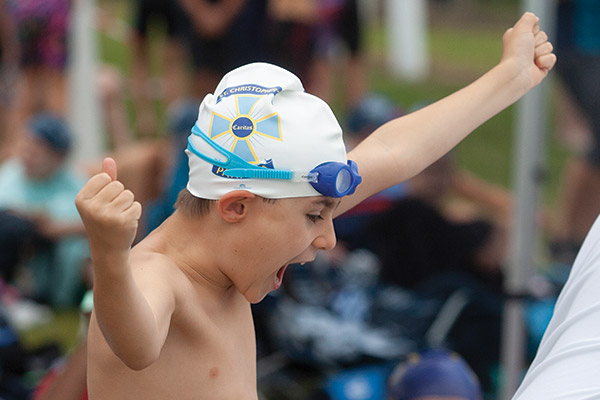 Photographer Natalie Roberts captures some of the poolside excitement.

It was left to Our Lady’s Sienna Lakomy to bring it home for her team but Sophie Aungle took the final leg for St Patrick’s instead.

Metre by metre Aungle kept closing the gap – until she ran out of pool. Literally.

Then Lakomy stretched out her arm just enough to touch the wall first and clinch the win for Our Lady.

In the Junior Boys (8-10 years) 50m Freestyle, a 15-year-old carnival record was shattered as Zach Brown torpedoed his way to first place with a time of 34.62 seconds, almost shaving a second off the previous quickest time of 35.56 seconds.

The nine-year-old Our Lady of Fatima student also picked up blue ribbons in the Junior Boys Relay and Backstroke, and red ribbons in the Breaststroke and Butterfly.

Aungle kept adding to her blue ribbon collection, winning the 50m Freestyle, 50m Breaststroke and 50m Butterfly before completing the sweep with the 200m Individual Medley.

There must have been something in the water because Sophie’s brother, Jackson, dominated his age group too, securing four blue ribbons and one red in the Senior Boys (11-13 years).

With the Archdiocesan Trials coming up, she is confident some of today’s stars will do well there too.

“Sophie and Jackson Aungle, along with Zach Brown and Eva Correia, were stand-outs here today and we’ll be very fortunate to see them progress on,” said Turnbull. “I can’t wait to see them in the pool.”

The top three students from each event will advance to the Sydney Archdiocesan Swimming Carnival in early March, where they will look to gain selection to the Mackillop Swimming trials in Homebush.

“At Sydney Catholic Schools, we believe sport is for everybody, from our elite athletes to students who have a love of sport.

“Sport also teaches students valuable lessons in working with others and how to be gracious in defeat.”