The students were treated to a special visit to the State Library as part of the program.

The workshops were overseen by the State Library’s Education Officer, Andrea Sturgeon.

They ran over two blocks, with guided drawing classes over Zoom in Term 1 and a series of online portraiture sessions in Term 3.

As part of the program, St Felix students also visited the State Library in Sydney, where they were treated to a tour of the library, morning tea and a private art lesson.

Together, the sessions aimed to build language development through art and expose students to new materials, techniques and concepts.

Keen from the get-go

Sylvia Braden, a teacher at St Felix, said the students really embraced the opportunities that the workshops presented to them.

“They were very eager to take part right from the start,” Mrs Braden said.

“The students were excited about using materials they had never used before, like oil pastel crayons and oil tip pens for example.

“There was an overwhelming response to each workshop, with more than 160 students attending each of the three portraiture sessions that were run in Term 3.”

Mrs Braden said there was a big shift in confidence among the students who participated in the workshops.

“The language that they were exposed to – language specific to art – was perhaps something that they hadn’t heard before.

“It was great to then later hear the students using the terminology they learned when asking questions and discussing their work.” 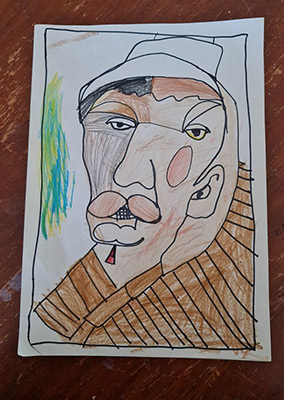 One of the fantastic artworks produced by the St Felix students.

Mrs Braden said that the workshops have had a noticeable impact on the students at St Felix’s.

“Some of the students were quite vocal about how much they loved painting and drawing,” Mrs Braden said.

“One student even brought in her own sketchbook from home to the State Library to show Andrea Sturgeon her work – and that was just lovely to see.

“Hopefully this partnership can continue into the future to help support the language development of our students.”