Coen’s star on the rise

Previous
Next
Coen’s star on the rise
domenictrimboli01January 17, 2022|

Our Lady Star of the Sea Catholic Primary School Miranda student Coen Hardy has been awarded a sports medallion at the 2021 Primary Sports Awards.

Coen was one of seven students to receive a medallion during a virtual ceremony, held in December 2021.

In case you missed it, you can watch – or re-watch – Coen receiving his medallion via the live link below.

Coen, who is described as humble and hard-working by his teachers and peers, said he was delighted after finding out he would be recognised during the awards.

“When I heard I was receiving a sports medallion I felt proud, excited and happy,” Coen said.

Noted for his humility and strong mindset, Coen said he dreams of one day lacing up his boots on the big stage – just like AFL legend Adam Goodes. 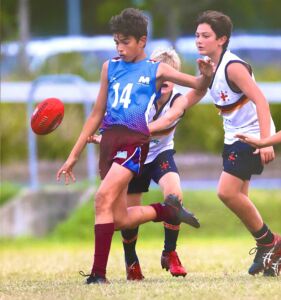 Coen in action at the 2021 NSWPSSA Australian Football Championships.

“My goal for the future is to become a professional athlete in sport,” Coen said.

A naturally gifted athlete, Coen said playing sports is a great way to be social.

“It’s fun, keeps you healthy and helps you make friends,” he said.

“It’s all about having fun and playing with your mates – that’s probably the best thing.”