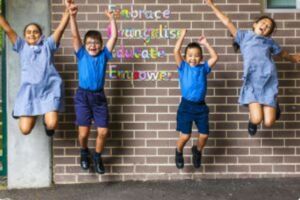 St Martha’s School began in 1925 in the old church of St Martha in Strathfield, which had been opened in 1905. Archbishop Michael Kelly asked the Dominican Sisters, who were already in Strathfield running Santa Sabina College, to staff the new school. Also promoting the development was the parish priest, Fr P Kerwick. In 1925 Sr Mary Benignus and Sr Ambrose began teaching the first pupils at St Martha’s – 28 girls and 11 boys. These were primary school students, and St Martha’s would always remain a primary school. Girls were taught from Kindergarten to Year 6 and boys were taught from Kindergarten to Year 3 (in recent decades to Year 4). St Martha’s remains a parish primary school within the Archdiocesan system.