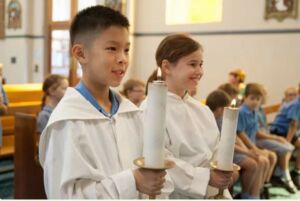 Our Lady Queen of Peace Primary School Gladesville was founded by the Sisters of Mercy (Parramatta Congregation) in 1925. The school opened on 13 October 1925. It began as an infants and primary school, taking girls from Kindergarten to Sixth Class and boys from Kindergarten to Second Class. The first principal was Sr M Xavier McLenaghan. Today, the school is twinned with St Charles Ryde with an executive principal overseeing both schools. It is a single stream Kindergarten to Year 6 school.