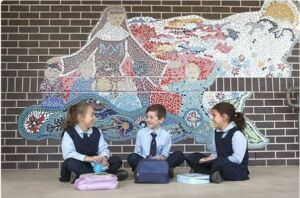 St Christopher’s Holsworthy opened on 4 February 2002. Mrs Maureen Higgs was appointed founding principal from the beginning of Term 4, 2001 in order for final preparations to be made for the school’s opening in 2002. When the school first opened there were 54 pupils in Kindergarten, Year 1 and Year 2. Today, the school still operates as a primary school for boys and girls from Kindergarten to Year 6.