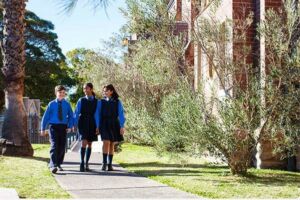 The school was opened in 1898 by the Sisters of St Joseph. At the time, Fr Edward Rohan was the parish priest, and on 24 July 1898, Cardinal Moran laid the foundation stone for a school-church at the corner of Trafalgar and Collins Streets. It continued under the leadership of the Sisters until 1975, when the first lay principal was appointed. Presently, the school caters for children from Kindergarten to Year 6.