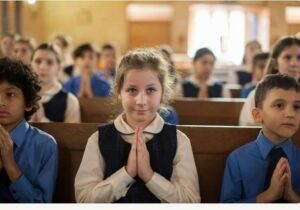 The original St Anne’s was built in 1862 on land granted to Sydney’s pioneer chaplain, Fr John Therry. However, the separate parish of St Anne’s only came into existence in 1953. It was then known as Enfield West, and this name was changed to Strathfield South in the mid 1980’s. By late 1956, they had also provided a school building, which was blessed by Cardinal Gilroy. St Anne’s School then began in 1957 with 55 children from Kindergarten to Third Class. Fr Patrick Kennedy arranged for the Dominican Sisters, who were already teaching in the Strathfield parish, to staff the school. Today St Anne’s remains a single stream parish primary school for boys and girls in from Kindergarten to Year 6.