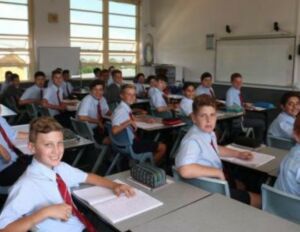 In December 1908, construction of the school began with the Marist Brothers helped by Fr O’Driscoll. The school was blessed by Cardinal Moran and on Monday 8 February 1909 the primary school opened its doors to 100 students. This was the only Catholic boys school in NSW south-west of the city. The first staff consisted of Brothers Gonzaga, (Principal), Eusebius and Marcellus. In December 1993 the Marist Brothers announced their withdrawal from the administration of the school; after this time there would be no teaching Brothers at Kogarah. Today the College is committed to developing strong partnerships with all stakeholders to support our students in becoming successful learners, confident and creative individuals and active and informed citizens.