Banding together through faith and music

Previous
Next
Banding together through faith and music
Isabell PetrinicDecember 16, 2020|

Marcus and Gala, from De La Salle College Ashfield and Domremy College Five Dock respectively, said they both joined the band after learning about it from a friend.

The experience has been life-changing.

“It wasn’t until I joined the band that I actually realised how music can bring people together and help spread a message that can help and impact people positively,” said Gala, a self-taught musician who plays bass guitar, ukulele – and sings!

The Youth Ministry Band is an evangelical project of CaSPA, the performing arts program of Sydney Catholic Schools. 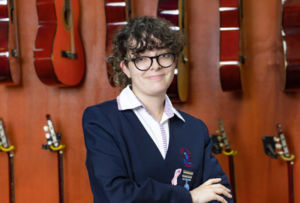 However this year, because of the COVID-19 crisis, the band is working on a digital showcase and online masterclasses instead.

Gala’s father, Ivan, and Marcus’ mother, Denise, had nothing but praise for the band. Mr Traconis said he has seen his daughter’s confidence, social skills and discipline levels increase since joining.

“I totally recommend the Youth Ministry Band; for the young ones to practice their skills in music, and be part of a great community” – Ivan Traconis

Ms Edwards agreed, “having mentors who are active in Catholic faith has had a positive influence on the students involved.”

Marcus said the band has helped him realise just how important God is in his life.

Gala said, “Music can create communities, break down barriers, and inspire like minded people to do the same in their own way.”

She said she loved how passionate all the band members are about their instruments and how “even when it feels like we’re just playing for fun, we’re still learning something.”

She is currently having her own fun experimenting with GarageBand, Apple’s popular music production software, and has her own YouTube channel.