Why choose a Catholic school

Previous
Next
Why choose a Catholic school
AdminSeptember 14, 2021|

What does going to a Catholic school teach you? We asked Sydney Catholic Schools’ alumni Aidan Dunne and Tommy Francisco to share their insights.

The former is a medical student, the latter is a folk-rap singer-cum-youth minister. For all that, they tell us they are travelling the same road when it comes to living out their faith. 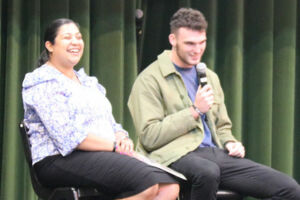 Aidan says his faith journey began at a Sydney Catholic Schools’ Evangelisation Day, which he attended in Year 9 “to get out of going to school for the day.”

“I’ve always been a person that required basic proofs about the complexities of the universe,” Aidan told the latest cohort of SCS students at this year’s Evangelisation Day.

He explained to them what led to his deepening of faith.

“One night, I was at a boxing class and I injured myself so I decided to leave early and go home,” Aidan began.

“I was sitting and waiting for my mother to pick me up when I asked God to give me a sign.

“It was a still night and I decided to go for a quick run while I was waiting.

“I got up and entered a dark and deserted alleyway and I said the only words I knew in the Bible from Psalm 23:4 and all of a sudden the wind picked up out of nowhere and for a few seconds only.”

Aidan credits Tommy as being among his spiritual influencers.

Since graduating from De La Salle College Ashfield in 2014, Tommy has pursued music as a full time profession and now plays to sell out audiences across Australia. He became involved in youth ministry after a friend invited him to a Youth for Christ event. 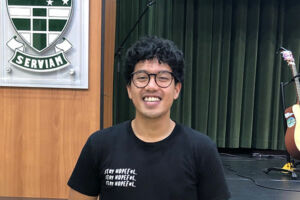 Told by his parents to have a Plan B, he inspires young people to have the confidence to follow their goals and passions.

“Often kids know what they want to do, but need someone to help draw it out,” Tommy said.

What Catholic education means for students in 2021
FacebookTwitterEmail