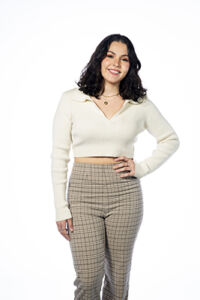 All four judges turned their chairs for Nicola during her blind audition performance this week of hit Billie Eilish song ‘when the party’s over’.

This gave the 20-year-old the opportunity to pick her coach on the Channel 7 show. She ultimately chose to join Team Guy Sebastian.

Cheering for Nicola off stage were her mother, father, brother and her Nonna (grandmother), who Nicola referred to as her “number one fan”.

“She’s been wanting me to go on (the program) forever,” Nicola told judge Jessica Mauboy during her blind audition.

Last year Nicola’s schoolmates Jordan and Sian Fuller also turned all four judges’ chairs during the show’s blind auditions. The talented siblings ended up progressing all the way to the show’s finals.

Now Nicola is hoping to follow in their giant footsteps.

The Voice Australia airs Mondays through Wednesdays on Channel 7.

The brain-boosting benefits of an Amadeus music education
FacebookTwitterEmail