HSC Science projects reach for the stars, from the heart

Previous
Next
HSC Science projects reach for the stars, from the heart
Jill StevenOctober 16, 2019|

Innovative teaching is helping students from Catholic schools in Sydney’s south to explore their interest in complex scientific fields, with projects that aim to future-proof Australia’s crops and find a potential cure for cancer.

When Extension Science was introduced to the HSC curriculum for the first time in 2018, Sydney Catholic Schools (SCS) chose to run it through a weekly video conference helmed by a teacher who is also a qualified analytical chemist.

The subject is supported by two face-to-face lessons per term to allow students to take it where their schools did not have the resources to teach the small numbers interested in the new course. The course develops scientific thinking, with students asked to develop a research question on a topic of their choice and write an evidence-based research report of their findings.

Program co-ordinator Sylvia Eleftheriades is an analytical chemist and teacher at De La Salle College Caringbah. She said the depth and choice the course provides gives students the self-reliance and skills to tackle university head-on.

“They basically have free reign,” she said. “They need to have a different mindset to learning and how they view mistakes along the way. Instead of treating mistakes as negative, they ask ‘What did I learn from this? Where to from here?’

“The individual disciplines – chemistry, physics, biology, and earth and environmental science – are very specific in their approach, whereas Science Extension can link more than one discipline so it’s more real-world and they can see where it fits in the scheme of things. 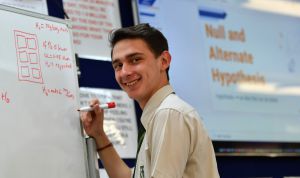 “It’s also important in today’s world where social media and the internet are so big that they don’t take things at face value.

“Coming from a science background has made it a lot easier to teach. Instead of just a theoretical perspective, it’s a real perspective, and that strengthens anything you do in the classroom.”

St John Bosco College Engadine student Kegan Quinn said being able to bounce ideas off like-minded peers and challenge each other was a core advantage of the hub learning style.

“I now have knowledge of statistics and philosophical thinking within science – all these things I would not otherwise have an opportunity to learn within secondary education,” he said. “It’s providing me with the tools to not be stressed moving into university. It’s almost like I’m ahead of the game now.”

Three other schools acted as hubs for the 20 first-time Science Extension students that enrolled from across 12 Sydney Catholic schools. Skilled teachers from Marist Sisters’ College Woolwich, Marist College Penshurst and All Saints’ Catholic Senior College Casula also guided students as the built their scientific skills through research and analysis.

The blend of online and face-to-face delivery also helped to prepare students for their exam, the first in the HSC sat online.

“Currently, I’m working off solar panels installed at my home and comparing similar temperature ranges to different weather effects,” he said. “Eventually it would be good to look at how rising global temperatures affect other renewable energy projects to see if a good alternative can be found, as they can be inefficient.”

Liam admits the choice is due to assessability and gives him the chance to do more of the physics-based research he loves.

“What drew me to extension science was university preparation,” he said. “At the moment we’re looking at statistical analysis which involves a lot of maths which is what I really like.”

Seeing his mother go through cancer treatment prompted Joshua Mills to think about how to alleviate the pain. The St Patrick’s College Sutherland student’s project draws on complex biology to create mathematical models that will help to reprogram cancer cells.

“I am looking at taking viruses to turn a cancer cell into an induced pluripotent stem cell, then use transcription factors to turn that into a red blood cell,” he said. “The rationale behind that is the process will remove the epigenetic mutations which make that cell cancerous.

The freedom created by Science Extension allows me to really try new things.

“Right now I’m using mathematical models to find out how effective this would be.

Seeing how the treatment is currently so hard for people to endure, I wanted to try and alleviate their suffering by creating a new one. The project was the best way I could reach out.

“The freedom created by Science Extension allows me to really try new things. I’m not worried about failing, because it is all made for us to learn from our experiences. It’s the mistakes that help to get you the results that make a difference.”

He has a head start on his preferred career in astrophysics after collecting data from three different locations across Sydney and graphing their level of light pollution to track the distance at which stars become brighter and more visible.

“People often need very large telescopes and complicated computers to analyse this sort of data information,” he said. “What I chose to do was see the effects over a distance, where a lot of people have looked at it over time.

St John Bosco College Engadine student Kegan Quinn’s project responds to climate change in a way the CSIRO could be proud of. He has analysed the trace element uptake of crops including radishes and root vegetables, with the ultimate aim of finding a way to produce more nutrient-dense plants for improved human health.

“I’m hoping to get an analysis of how much difference there is between a regular soil that agriculture tends to use, versus one that has trace element enhanced features,” he said.

If I am right, as global warming continues we can actually grow the nutrient level of plants to make plants easier to grow

“If there is a significant difference, I’m hoping it can demonstrate how empty calorie intake can be avoided for humanity and help us to regain the sort of healthy diets we had 20 years ago.

“If I am right, as global warming continues we can actually grow the nutrient level of plants to make plants easier to grow, rather than harder within a hotter and more carbon dioxide-heavy environment.”