What do Jackson and Sophie Aungle and Olympic champions Cate and Bronte Campbell share in common? 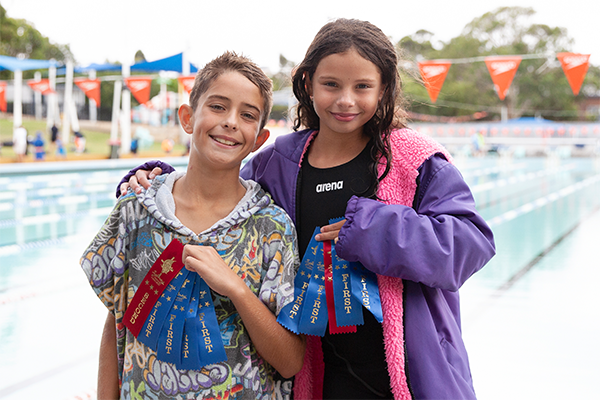 At Sydney Catholic Schools (SCS) Zone 5 Swimming Carnival, the duo swept all before them, picking up 11 ribbons between them – nine were blue, two were red.

“I didn’t beat any of my personal bests today but I think I did pretty well,” said a modest Jackson.

Ten-year-old Sophie placed first in the 10-Years 50-metre Freestyle, Backstroke, Breaststroke, and Butterfly events, and rounded it all off with a win in the 200-metre Individual Medley. The only race she didn’t win was the Junior Girls (8-10 years) Freestyle Relay.

“I’ve been swimming for a few years and I’ve already been at Mackillop so I want to get there again,” Sophie said with reference to the next competition level after the Archdiocesan Trials, for which she and her brother have now qualified.

“I want to get a race record because I don’t have any yet.”

The siblings agreed that right now Jackson is the better swimmer, but Sophie believes she’ll take the mantle soon enough.

“Jackson is the better swimmer, but he’s also older than me,” Sophie stated confidently, adding “I will be better than him.”

The gifted siblings are just as successful on the grass as in the swimming pool.

“I want to be a soccer player, or a runner,” said Jackson.

Sophie, on the other hand, is still undecided about her sporting future.

“I like playing soccer, but I’m unsure about swimming because what’s the point of doing one sport when you’re really good at a few sports,” Sophie said.

With the Archdiocesan Trials less than a month away, the Aungle siblings are definitely ones to keep an eye out for.