A story about an un-fun fair has secured a Sydney Catholic school student a win in the 2022 WriteOn Competition. 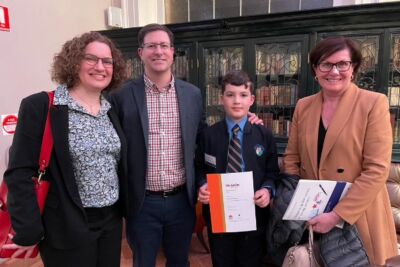 Buoyed by his win, the school has now established an “Author’s Corner” in the school library where children who love to read and write can get together to share and discuss their ideas, projects and the latest books they’ve read.

“I wanted to get gold, so I tried again and I won!” – Samuel Phillips

Samuel’s gold medal-winning story will be included in the best of WriteOn 2022 anthology.

An annual competition of the NSW Education Standards Authority (NESA), in conjunction with the State Library of NSW, WriteOn asks students in Years 1 to 6 to write a 500-word creative piece based on an image.

A photo of a fairground games stall (pictured above) was the inspiration for Samuel’s 2022 entry.

“I wrote about an un-fun fair,” Samuel, a Stage 2 student at Holy Innocents, explained. 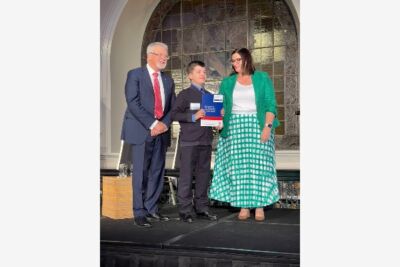 “There are seven kids and they go to a fun fair, where they all get picked off one by one.

“They then defeat the evil wizard, Zoron, and their friends come back.”

Samuel accepted his award at the State Library from the NSW Education Minister, Sarah Mitchell, on 12 September.

Deborah Bestulic, Principal of Holy Innocents’ Catholic Primary School, couldn’t be prouder of Samuel, especially his indefatigable will to win.