WriteOn past winners: ‘Be creative, try your best!’

Previous
Next
WriteOn past winners: ‘Be creative, try your best!’
Jade RamirezJune 4, 2021|

Sydney Catholic Schools’ (SCS) primary school students are encouraged to exercise their imaginations and writing skills in this year’s WriteOn competition. We sat down with our past SCS winners who shared their tips for success.

They are only in Year 3 but Savannah Burgess and Nicholas Bertoia are already published authors.

The Sydney Catholic Schools students’ work was included in the best of WriteOn 2020 anthology.

The annual writing competition for NSW students in Years 1 to 6 asks students to write a 500-word creative piece based on an image.

Savannah, who attends St Joseph’s Catholic Primary School Belmore, received a gold award from among 362 entries for her story. It was about a boy who was bullied, but finds a true friend when a picture of a dog that he drew comes to life.

Her advice to this year’s entrants?

“To look at the stimulus and use your imagination,” she said. “It helped me to think of what to write about.” 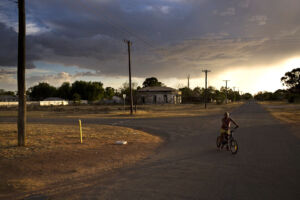 WriteOn: Students will write about this image in 2021.

In 2021, students may write letters, poems, narratives, journal entries, or scripts for radio, screen or stage. An image of a child riding a bike on a semi-rural road is their inspiration.

“They should just try their best,” said Nicholas.

The St Declan’s Catholic Primary School Penshurst student received a silver award in 2020 for a story about a boy who lost his dog.

“Not only do creative writing competitions such as this create opportunities for self-expression, improved communication and imaginative licence, they also contribute to a student’s self-concept and self-esteem,” Mr Muldowney said.

“Students can see that their style and expression has value outside the classroom and can be appreciated by others.”

Entries to WriteOn 2021 close on 25 June. Read more about how to enter here.