More than 450 students competed at the Sydney Catholic Schools Archdiocesan Swimming Carnival vying for berths at the MacKillop championships in Homebush.

Eighty-two Sydney Catholic schools were represented at the mammoth event, which needed to be split into two sessions due to COVID-19 regulations.

After months of being locked out of carnivals due to COVID, parents were also a welcome sight in the crowd at Auburn Ruth Everuss Aquatic Centre.

“By splitting the event, we reduced numbers allowing for parents to be present,” SCS’ Sport Education Office: Pre to Post, Rene Vella, said.

“It’s nice to be back as a community” – Lisa Cummins

How the day unfolded

Records tumbled at yesterday’s Archdiocesan Swimming Carnival, with one coming right at the end of the day to sign off the event in style.

The event kicked off with an incredible race in the Open Girls 100-metre Freestyle.

Mila Raven from Villa Maria Hunters Hill and Isabella Esposito from Our Lady of Lourdes Earlwood could not be separated, touching the wall at the same time to finish equal first.

Raven was definitely the star of the morning session, winning the Senior Girls Relay, 12-year-old 50m Freestyle and the Girls 12-13 year-olds 50m Backstroke. 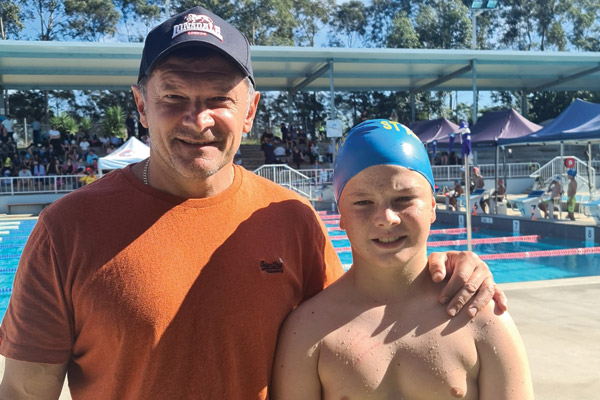 Our Zone 6 star, St Patrick’s Sutherland swimming sensation Sophie Aungle had a good morning herself, winning both the 10-year-old Girls 50m Freestyle and 8-10 year-olds Backstroke and placing second in the 8-10 year-olds Relay.

The afternoon session splashed off with the most emphatic win of the day when Our Lady Fatima Caringbah won the 8-10 year-olds Boys Relay by a whopping 21 seconds.

But the day belonged to Szabo, whose form carried on into the day.

The 10-year-old continued his dominance by taking out the 50m Freestyle and 8-10 year-olds 50m Backstroke events.

Meanwhile, Aungle found herself in a battle with another young star, nine-year-old Mia Hoo from St Bernard’s Botany who put up a real fight.

The day came to an end in spectacular fashion with Olivia Treadwell from St Michael’s Meadowbank breaking the Girls 11-13 year olds 200m Individual Medley record, clocking in at 2:51.90 minutes.