Year 6 students then led mixed-grade groups through engineering and other challenges. They made wands out of coloured pipe cleaners to blow square bubbles, built bridges, and crafted musical instruments. Parents donated equipment from home to aid the experiments. The day ended with a whole-school plane challenge.

“We wanted to expose the students to lots of hands-on learning experiences that relate to science, engineering, and maths so they could collaborate to solve problems and be creative,” said STEM reference teacher Suha Noun.

“The students made their own costumes using recycled materials. We really encouraged the parents not to go to the shops and buy costumes so the kids really used their own ideas to make their costumes for the parade.”

“Some might have had time to solve and test their hypotheses, depending on how they chose to approach the question,” she said. “It’s all about testing their ideas and developing a feel for what science is all about, and answering ‘What does a scientist do?’” 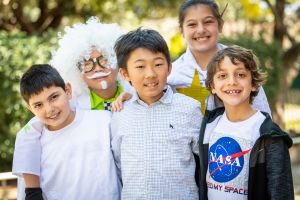 The event compliments a year of STEM activities and experiments across the curriculum, including coding games, making gelato, and growing mung bean sprouts without soil in different conditions. Students have also researched atoms, forces, and viruses.

“I think STEM days are really good because they let us go out of the curriculum, even though it’s really expansive, and show our imaginative sides with our costumes,” said Year 6 student Brendan Pham-Le.

“Some of us in Year 6 included science principles in our costumes, so that’s really good as well. What we learn in class is on the border of advanced, so it won’t explode our brains but it won’t bore us.”

Year 5 student Jayden Runadi has a keen interest in chemistry and said a mistake was behind the discovery of phosphorous which is now used in items including fertilizer and matches.

“Our teachers tell us to use trial and error and to try be a bit more creative,” he said. “Sometimes it’s good to be creative. Even though in science there are a lot of rules to follow to make something, if you want change you could make a new invention out of another discovery or invention.”

St Martha’s students share why they love science and what they’ve learnt from it.

“I like science because you get to be creative and you learn a lot of things that are useful to everyday life. For example, in class we learnt that wheels were one of the first inventions. Without them, I don’t know how our society would be running at the moment. We also learnt how to code and created our own game which was interesting.”

“The reason I like science is because there are a diversity of things that you can learn about. When you start learning all about science there are many things you can do. People who learn about space can do some stargazing, and those people who start learning about engineering can start building more machines. Science is basically the foundation of most things we do today.”

“I like to experiment with different instruments in technology, and I also really like coding to make many different images or games.”

“I want to be an architect in the future so I like learning about civilization in particular – how we get power, water, and all our basic needs. When one thing is created it opens to 50 more things, so we can learn and learn.”

“I like science because I like being creative and knowing new things. If I don’t know something science people can tell me. It’s really cool to know about space and other things.”