The Australia-wide competition called for students to submit an idea for an invention or concept that could help change the world.

Noah’s idea, Sports Hang – an app that helps connect kids who are looking to play sports with others – was named as one of four finalists in the Years 5 & 6 category.

The Year 6 student was awarded $1,000 as a finalist and is now in the running for the $10,000 major prize which will be announced on Friday 19 November.

Noah said his idea for Sports Hang was prompted by seeing kids at the park who were alone and playing by themselves.

“Sometimes I feel like that too and I find it hard to go up to other kids and talk to them,” he said.

“I have two younger brothers I play with but sometimes I get bored and want to play with kids my age.

As part of his submission, Noah put together a 200 word rationale outlining his vision for Sports Hang and how it could make an impact in the lives of kids all around the globe. 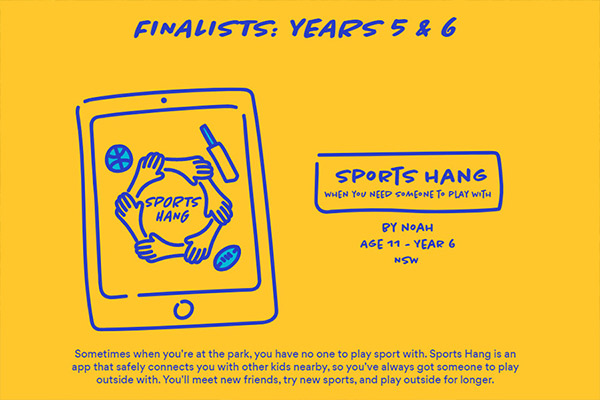 Noah’s entry was one of four finalists in his age group in Australia.

As a finalist, Noah was given a one-on-one mentoring session with social impact entrepreneur Simon Doble to help develop his idea ahead of a final pitch video presentation for the judges.

Noah said Simon passed on some invaluable wisdom about concepting and developing an idea.

“Simon said he would have loved my idea during his childhood,” Noah explained.

“He talked me through the process of coming up with an idea and gave me ways to improve it.

“He also taught me about research and development which helped me explore more options – he was really inspiring.”

ONE SMALL STEP FOR KIDS

Rachel Loughry, who together with Crystal de Leon teaches Noah at St Paul of the Cross, said they introduced the competition to the students to keep their scientific and analytical minds ticking over during remote learning.

“We saw the competition advertised and we thought it would be a great chance for our students to spend some time thinking about an idea that could change the world,” Mrs Loughry said.

“We encouraged them to look at things from their own perspectives, to think about solving a problem that they could relate to and not something too big picture” – Rachel Loughry

“Once they had their idea, we offered them a session where we could help with their ideas and give feedback before they submitted their entries.”

As Noah waits to see if he’ll be taking home the $10,000 major prize, Mrs Loughry said in the school’s eyes he is already a winner.

“To be one of four finalists in his age group in Australia is very exciting – we’re all just proud,” Mrs Loughry said.

Enrol now at St Paul of the Cross

ST PAUL OF THE CROSS: A VIBRANT CATHOLIC COMMUNITY…