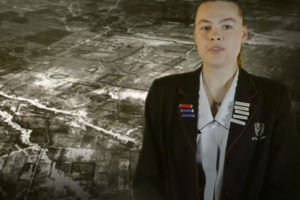 The Lost Diggers of Fromelles is based on video profiles Year 12 students created in their Year 9 History class. These feature Australian soldiers whose identities were recovered in a DNA matching program at the mass grave site.

“The girls were able to contribute to a history that is still being written.” – Kerrie McDiarmid

The students collaborated with Fromelles book author and broadcast personality, Patrick Lindsay, to create a film that tells the story of the battle of Fromelles through the eyes of young women today.

The July 1916 battle remains the largest loss of life within 24 hours in Australia’s military history.

“From first being given a soldier’s name and number, we now have a personal connection with these courageous men,” Ms O’Sullivan said.

St Clare’s principal Kerrie McDiarmid said the project reflected the school’s commitment to give students opportunities to collaborate with the broader community and make a difference in their world.