Nathan Barbara has proven he’s one to watch for the future after a stellar performance at the 2022 Australian Track and Field Championships at Sydney Olympic Park. 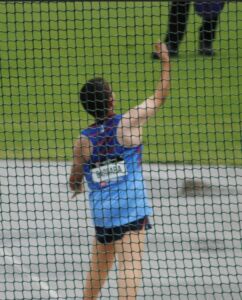 Nathan in action during the shot put

The fact he threw a 5kg shot put, instead of his usual 4kg weight, after being moved up to compete in an older age group made the feat all the more impressive.

It was a weekend to remember for the youngster, who had been hard at work preparing for the Championships after qualifying via the NSW Junior Championships earlier in the year.

“As it is an annual event, I have been looking forward to the Championships for a long time, but I felt confident as I had been preparing well to compete,” Nathan said.

“Being at the stadium made me feel very happy, excited and proud that I was representing New South Wales at the Championships” – Nathan Barbara

Nathan, who is a double amputee and competes with prosthetic legs, said his love for athletics first began as a young student at St Anthony’s Catholic Primary School Marsfield.

“My PE teacher, Mrs Kolman, encouraged me to compete in athletics and I started competing in inter-school competitions and also joined Little Athletics,” Nathan said. 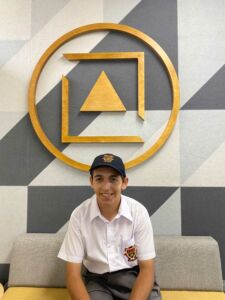 “This became part of my weekly routine and my family has been extremely encouraging and supportive of my athletics journey.”

“With my achievements, I know I can be an inspiration to other para-athletes to show them that you can achieve your goals no matter what your ability level is” – Nathan Barbara

A role model for others

Casting his eye to the future, Nathan said he wants to stay involved in sport and would love to one day pull on the green and gold.

“I have an interest in sport and would maybe like to pursue a career in the sporting field,” Nathan said.

“My goals for the future include representing Australia at the Paralympic Games and also continuing to be an advocate for para-athletes everywhere.”