The sport medallion is awarded to Sydney Catholic School students who have represented MacKillop on three or more occasions and/or were selected into an NSWPSSA State Merit team during the school year.

“It was a really good surprise,” Sydney said.

“When I first heard that I was receiving a sports medallion I was really shocked, but happy at the same time” – Sydney Israel

Sydney was one of seven students to receive a medallion during a virtual ceremony, held in December 2021.

In case you missed it, you can watch – or re-watch – Sydney receiving his medallion by clicking on the live link below.

Sydney has been involved in all aspects of school life and is willing to take on all responsibilities asked of him.

He is very kind, particularly with younger children, and is very well-mannered and respectful. 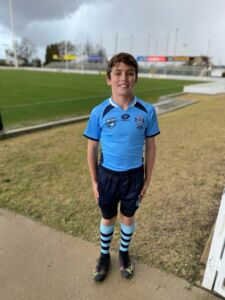 Sydney has shown plenty of potential both on and off the field.

Sydney is not just talented on the rugby league field, but also at the beach as well.

“My greatest accomplishment in sport would probably be winning the state relay for nippers, or making the state footy team,” he said.

“The best thing about playing sport is you get to meet different people, make friends and travel (to) different places.

“People should get involved in sport because it’s good to stay active, you get to meet different people and it’s just fun.

Sydney looks up to a Melbourne Storm superstar and a well-known name to rugby league fans.

“My sport champion is Ryan Papenhuyzen because he’s just like a good person and he stays active outside of sport and he’s really fast,” he said.