The sport medallion is awarded to Sydney Catholic School students who have represented MacKillop on three or more occasions and/or were selected into an NSWPSSA State Merit Team during the school year.

Joshua says making the team after the NSWPSSA Boys Australian Football Championship in Byron Bay is his greatest sporting achievement. He was also pleased to receive a sports medallion.

“I felt immensely proud but also happy that I got the recognition for what I did in Byron and all the other sports through my school,” Joshua said.

He was one of seven students to receive a medallion during a virtual ceremony, held in December 2021.

In case you missed it, you can watch – or re-watch – Joshua receiving his medallion by clicking on the live link below.

“People should get involved in sport because it’s fun, it’s healthy for you and you can make friends for a long time,” Joshua said. 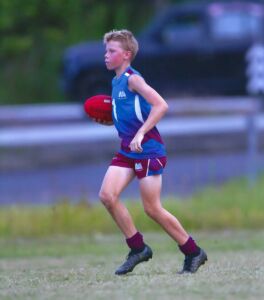 Joshua is eyeing off a career in the AFL in the future.

Joshua is an Essendon Bombers fan and says their former star captain, James Hird, is a role model.

“I would like to make the AFL and possibly do well in (the) AFL in the future,” Joshua said.