The sport medallion is awarded to Sydney Catholic School students who have represented MacKillop on three or more occasions and/or were selected into an NSWPSSA State Merit Team during the school year.

“When I first heard I was receiving a sports medallion I was excited, proud and thankful that my training had paid off” – Jackson Gray

Jackson was one of seven students to receive a medallion during a virtual ceremony, held in December 2021.

In case you missed it, you can watch – or re-watch – Jackson receiving his medallion by clicking on the live link below.

A Colour House Sports Captain at St Margaret Mary’s, Jackson is a wonderful role model for the younger students.

“My goals in the future are probably to reach a high level in rugby league and one day hopefully make (it to the) NRL,” he said. 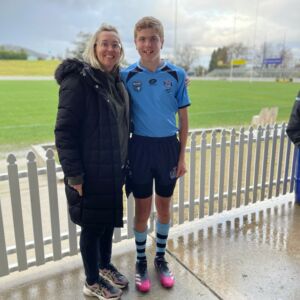 Jacskon hopes to one day pull on a Sydney Roosters jumper.

The Sydney Roosters fan looks up to the team’s captain James Tedesco.

“He’s a good leader and he also has made it in a high level of rugby league,” Jackson said.

With those lofty ambitions, Jackson has already received national attention when the Today Show visited St Margaret Mary’s in 2021.

For now, though, Jackson’s motivation for picking up a football is simple.

“The best thing about playing sports is probably passing the ball around with my mates and just having fun,” he said.

“People should get involved in sport because it helps with their fitness, health and keeps them active” – Jackson Gray