Former Marist College Eastwood student, Kevin Torpey, is helping to unlock the potential of the next generation of students.

It is the first time the association has awarded a scholarship.

The Kevin Torpey Scholarship will assist Damon to pursue a tertiary education next year in either engineering or a mathematics- or science-based course.

“My objective was to provide financial assistance to college students, assisting them to attend university with reduced financial concerns,” said Mr Torpey, who has maintained contact with the college over the years through class reunions.

Kevin Torpey graduated from Marist College Eastwood in 1955, where he was a prefect and house captain.

Over the past 40 years, he has been involved in the development of many diverse major mining projects involving oil, iron ore, aluminium, nickel, lead/zinc, uranium, magnesite, coal and gold.

His career – which has taken him all over the world – has spanned mineral projects, project design, as well as development,  management and consultancy services.

He originally wanted to become a civil engineer and credits the college with “allowing me the flexibility to change direction immediately upon finishing university and follow a different career”.

In a statement, the Old Boys Association thanked Kevin Torpey for his generosity and highlighted the importance of the association’s assistance to the college by way of donations.

“Through the generosity of Kevin Torpey, the Old Boys Association has been able to award our first ever scholarship to Damon, consistent with the terms of our Trust Deed,” the statement read.

“In the Marist tradition and ethos, as a community the Old Boys Association is committed to providing support to students while they are at the school and, where possible, based on our financial resources, through scholarships in various disciplines to provide assistance in further tertiary education.” 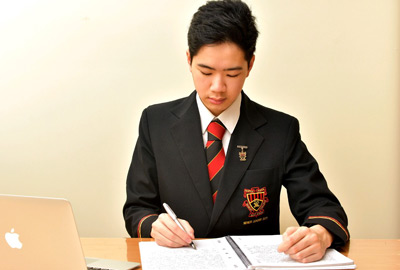 Damon Lam writing in a workbook.

“Receiving the Kevin Torpey Scholarship is such a privilege,” said inaugural recipient, Damon.

“I’m driven to be my best at university to make the most of this opportunity.

“It (this scholarship) has provided me both the time and the space to focus on my studies, so that I can really put my best foot forward.”

The Old Boys Association was formed in 1987 when then principal, Brother William Connell, convened a meeting of the Old Boys to prepare for a past students reunion.

The Old Boys offer support to the college in a variety of ways – from attending school events such as open days, careers and creative arts evenings, through to offering tangible financial assistance by way of donations from the Old Boys’ Bursary Fund.

The Bursary Fund was established by the Old Boys Association to mark the golden anniversary of the college in 1987. Each year, usually at the beginning of Term 1, the association makes a cash donation to the college with the aim of providing financial assistance to its students.

Students had to apply for the inaugural Kevin Torpey Scholarship.

“The competition was tough and making a decision as to which student should receive the scholarship came after much deliberation,” Ms Rossetti said.

“All of the applicants were of the highest quality but when matching them up against the criteria set, Damon Lam was the applicant selected.”