Marist College Eastwood students have marked National Reconciliation Week and the rich history of their school and suburb with a painting that will last for generations to come.

The mural, painted with Indigenous artists Deslyn Marsh and Isaac Bamblett from Aboriginal education provider Wandana, features red oxide circles and four yellow travel routes to represent the four name changes the school has been through.

Other symbols on the mural show the land and bush tucker that sustained the local Wallumettegal tribe.

“Students gained a better understanding of the local land and Aboriginal customs, as well as an appreciation for the work that can be achieved when we come together as a community” – Silvana Rossetti 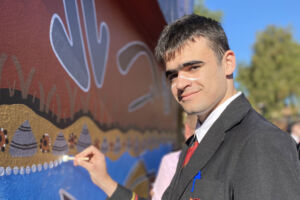 “It has been wonderful to learn about the original inhabitants of this land and to learn that a fish – snapper – was the totem of the Aboriginal people living on this land,” Marist College Eastwood Principal, Silvana Rossetti, said.

“The fish is also a powerful symbol for Christians, so it is a beautiful reminder for us of both Aboriginal and Christian spirituality.”

Mrs Rossetti said the mural was a way to raise awareness of Aboriginal culture and was situated in an area that was highly visible to the school’s staff, students and visitors.

“We are proud to be able to acknowledge not only the history of the school, which began in 1937, but also the land upon which it is built,” she said.

Support for our Indigenous students
FacebookTwitterEmail