Olivia Callaghan is hoping to defend her title as one of the best in NSW when she attends the Mackillop state cricket trials in September.

The multi-talented sportswoman and Year 6 student at St Michael’s Catholic Primary School Lane Cove would love to follow in Elise Perry’s footsteps and play for the Matildas and the Australian women’s cricket team, and is already on the way to achieving her goal. Last year she won a national championship as part of the NSW state cricket team, and hopes to progress to Mackillop and then state teams so she can do the same in 2019. 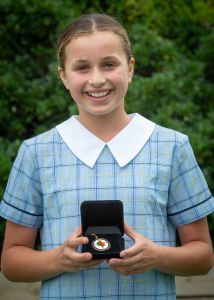 Olivia has further played in both representative and Mackillop teams for soccer – including under 14s and mixed sides. She said both sports have taught her the value of resilience, humility, and striving for a goal, all of which are assisting her to fulfil her current role as school house captain.

“I love that soccer and cricket are both team sports,” she said. “Playing with the boys, and now playing with older kids for the 14s, they teach me a lot – to get up, try again and one day you’ll get there.”

“It’s also awesome to be a leader, leading a house and getting everyone up on their feet and participating.”

Olivia has been pursuing soccer since she was four, and fell in love with the sport watching her sister’s games. Her Year 1 teacher, Steve Pryde, saw she was a talent and encouraged her to give cricket a try as well.

They teach me a lot – to get up, try again and one day you’ll get there

Last year, both Olivia and Mr Pryde received Sydney Catholic Schools Primary Sports Awards – Olivia for her achievements on the field, and Mr Pryde for his encouragement of the many athletes at St Michael’s.

Mr Pryde said the school is happy to support Olivia’s sporting endeavours, including long selection trials far from home. Last year, when her cricket team was playing in the national championships, classmates followed their journey via a webcast set up by the organisers.

“It’s a pretty amazing achievement to make two Mackillop teams in Year 5 and then to do it again in Year 6, but Olivia is very humble and takes it all in her stride,” he said.