Catering for the educational needs of not one, but four, sets of twins is an exciting prospect for the Kindergarten teachers at St Patrick’s Catholic Primary School Mortlake.

The students were among the 62 Kindergarten starters who met their first day of primary school with a smile alongside their parents and new teachers.

Sara and Alfredo La Cava’s sons Alexander and Antonio were among the twin influx. Mrs La Cava became familiar with the school when working there as a casual teacher.

“I’ve got to know the staff a bit and they’re wonderful people,” she said. “The school has a great community spirit so that’s why we thought it was a good school for the boys to be at.

“They were excited, nervous – a mixed bag of feelings. Now that we are here they’re relaxed and looking forward to a good day.”

They both love reading and learning and exploring.

Mr La Cava said that although they had different interests, it was helpful that Alexander and Antonio had each other for support in the early days of school life.

“Especially for those first days until they create new friendships, I think it makes it easier that they have each other,” he said. “One is more creative, the other is more sporty, but they both love reading and learning and exploring.”

Caroline and Bou Souvannavong’s twins Joshua and Oliver are happy to study and play independently, and will learn in separate classrooms this year.

“I wanted them to have their own stories to tell me when they came home from school, and I didn’t want them to be compared with each other by their peers or educators in the classroom,” Mrs Souvannavong said.

“I know the teachers make an overt effort not to compare, but thought it would be easier if they were separate and can pursue their own interests. They are each other’s best friends, but quite different personalities. They are looking forward to learning to read and a different environment.”

It is good for them to develop their independence.

“They were very excited,” he said. “No tears – only from mum and dad.

“It is good for them to develop their independence. They’ve been together since they were born, never apart even for a day. Separating them was a key milestone for us.” 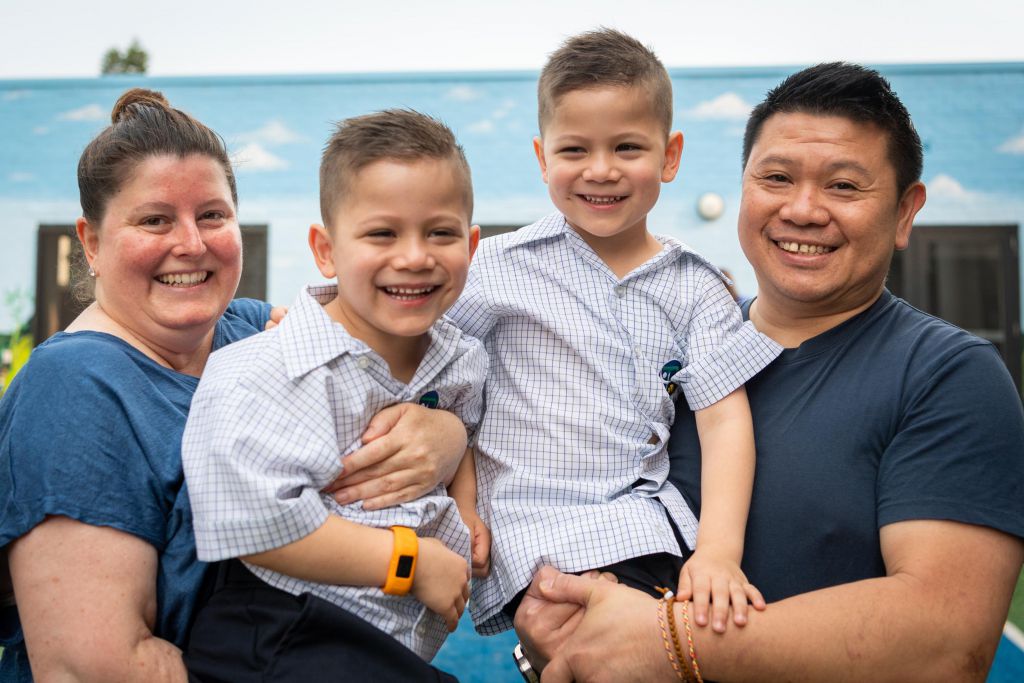 One of the key things for the teachers is appreciating that all students, including each of the twins, have unique personalities.

Joining the Souvannavongs and La Cavas are two more sets of twins, classmates Max and Oscar Tosolini and Joseph and Charbel Chidiac.

Mrs Chidiac has experienced plenty of school milestones with another child starting high school this year as Joseph and Charbel follow the footsteps of their twin sisters, now 16, with a smooth start to Kindergarten.

“They have each other and the eldest help the youngest,” she said. “They’re very good.”

Principal Amanda Westgate said all of the school’s new kindergarten students had attended day care and were familiar with routine, which made the transition to school easier. Orientation days and a playgroup attached to St Patrick’s also helped with school familiarisation.

For the teachers, getting to know each of the children to best develop their skills and to pick up on their love of learning early is a priority.

“One of the key things for the teachers is appreciating that all students, including each of the twins, have unique personalities,” she said.

“They will need to work to understand the differences to build on their strengths in education. Some are already more mathematically inclined while the others prefer the literature side of life so it’s making sure that you are really catering for each individual’s needs.”