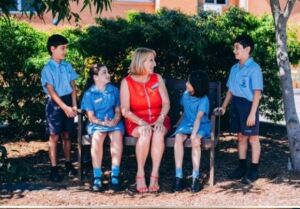 St Michael’s Hurstville was founded on 26 January 1886 by the Sisters of Charity. In the 1890’s, another school, St Mary’s of the Sea, was established. In the 1920’s, St Michael’s and St Mary’s Star of the Sea schools were amalgamated under one administration. In the late 1960’s, a separate administration was introduced for the primary and secondary sections of the school and in 1933, the secondary school changed its name to Bethany College.