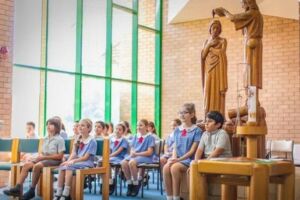 John the Baptist Catholic Primary School opened in 1989 with 86 children and 6 members of staff. Originally planned as a two-stream school, it soon became clear that this would be insufficient to cater for the rapid development in the Bonnyrigg area. This resulted in John the Baptist becoming a four-stream school in 2000. Today the school community recognises the presence of Christ in each person and its implication as they interact with each other. The school seeks to bring to each child a knowledge of Jesus and his teachings, endeavouring to assist each individual to love and follow him.