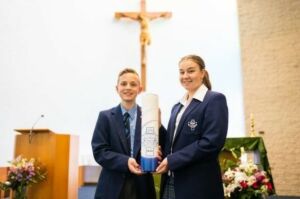 Named after an eminent Doctor of the Church, Aquinas College, Menai was opened by Cardinal Edward Clancy in 1993. This was to be a secondary school for the rapidly growing residential area which had formerly belonged to the parish of Sutherland. Aquinas College opened with 50 boys and girls in Year 7, 7 teachers and 2 ancillary staff, all under the leadership of the founding principal, Mr Peter Turner. The college has continued to grow with the first Year 12 class completing their HSC in 1998. In 2020, the college had 1080 students and 112 staff.