More than 2,500 students at Sydney Catholic schools have embraced the Japanese language in the virtual world, and their learning journey continues in a real space.

It has been a year since Sydney Catholic Schools’ Japanese Centre of Excellence was established at Casimir Catholic College and St Brigid’s Catholic Primary School Marrickville to give students the opportunity to develop their skills in the language from Kindergarten through to Year 12.

The centre offers a continuity that is missing from many school language programs and, though still in its infancy, is creating plenty of buzz among parents and students who see the advantage and fun in mastering an Asian language.

The best thing about learning Japanese is that you actually know how to communicate in someone else’s language.

“Ultimately the centre hopes to provide a place for students from all of Sydney Catholic Schools’ 150 primary and secondary schools to learn Japanese if they wish, regardless of whether or not they have a Japanese teacher at their school,” said the centre’s co-ordinator Andrew Finch.

“This opportunity will be supported by a team of experienced teachers and the use of the latest technology. Students who want to challenge themselves by learning a new and exciting language can enjoy that learning throughout their whole school journey, all the way through to the HSC.”

The Centre of Excellence follows a successful pilot and rollout of the Japanese Online course created by Sydney Catholic Schools for students in Years 5 and 6.

Technology will continue to be a mainstay in the delivery of the language. Year 11 students can this year study a Japanese Beginners course through a blended learning model – a combination of digital and face-to-face lessons.  A group of 17 students from across seven Sydney Catholic secondary schools have taken on the challenge in 2020. The same blended learning method will extend to a Continuers course offered from 2021.

Students in Years 7 to 10 will also be able to study through the centre within the next five years.

Mr Finch said many students had a natural connection to Japanese through food and pop culture including manga, anime, and sports such as the J-League that includes Australian players.

“There are enormous economic and trade opportunities, as well as ones in travel and hospitality, that exist for Japanese language learners,” he said.

The centre also brings many opportunities for students to collaborate as they work towards proficiency in the language.

There are enormous economic and trade opportunities that exist for Japanese language learners.

When St Brigid’s students first marked Japan’s Kodomo No Hi, Children’s Day in May, Casimir Year 11 Japanese students acted as mentors. They helped the students to write a message on coy fish decorations they had made for the occasion, and conversed with native Japanese speakers in their own classroom and playground when the school hosted visiting students from Casimir’s sister school in Osaka. 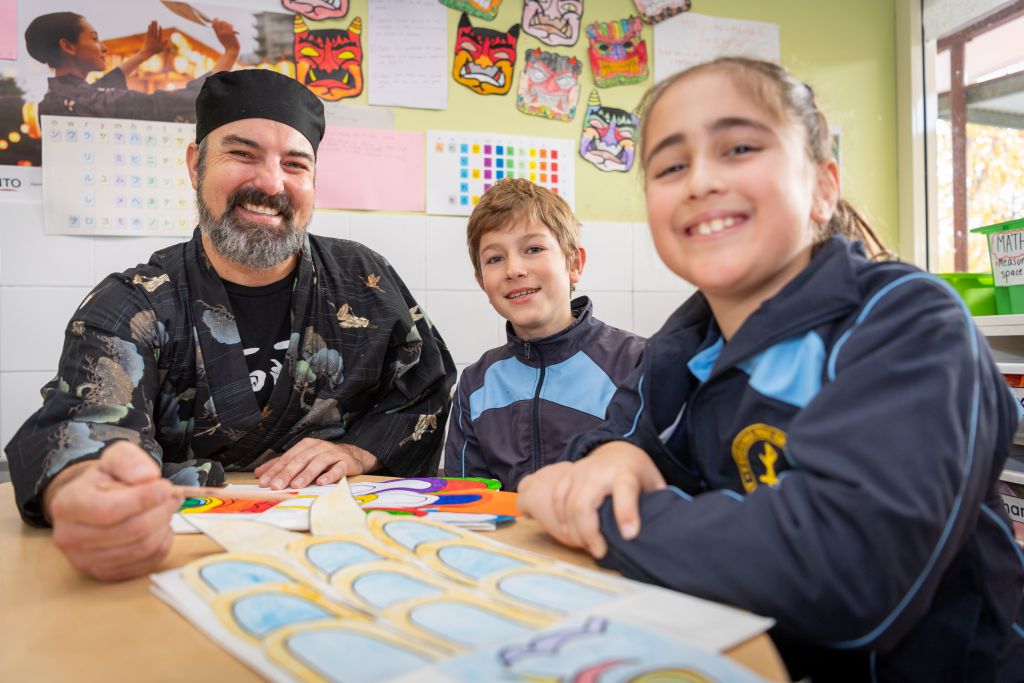 Year 5 students Oliver Jaffer and Ava Moonen both see the benefits of learning Japanese at the centre.

“The best thing about learning Japanese is that you actually know how to communicate in someone else’s language and it could be useful in your life,” Oliver said.

Ava agreed.  “If I want to go to Japan I can introduce myself. We also learnt about colours and the different writing – hiragana, kanji and katakana,” she said. “Sensei is nice. She’s a little strict but it’s good because it pushes us to learn more so we’ll have a better understanding of it later in our life.”

Peer Audrey Haralambou goes to weekend Greek school where she is proficient enough in the language to write essays, but said she enjoys learning Japanese more.

“I liked how I could pronounce the words easily and it was very fun and interactive,” she said. “The teacher is really nice. It’s more fun, but you learn at the same pace. I really like it.”